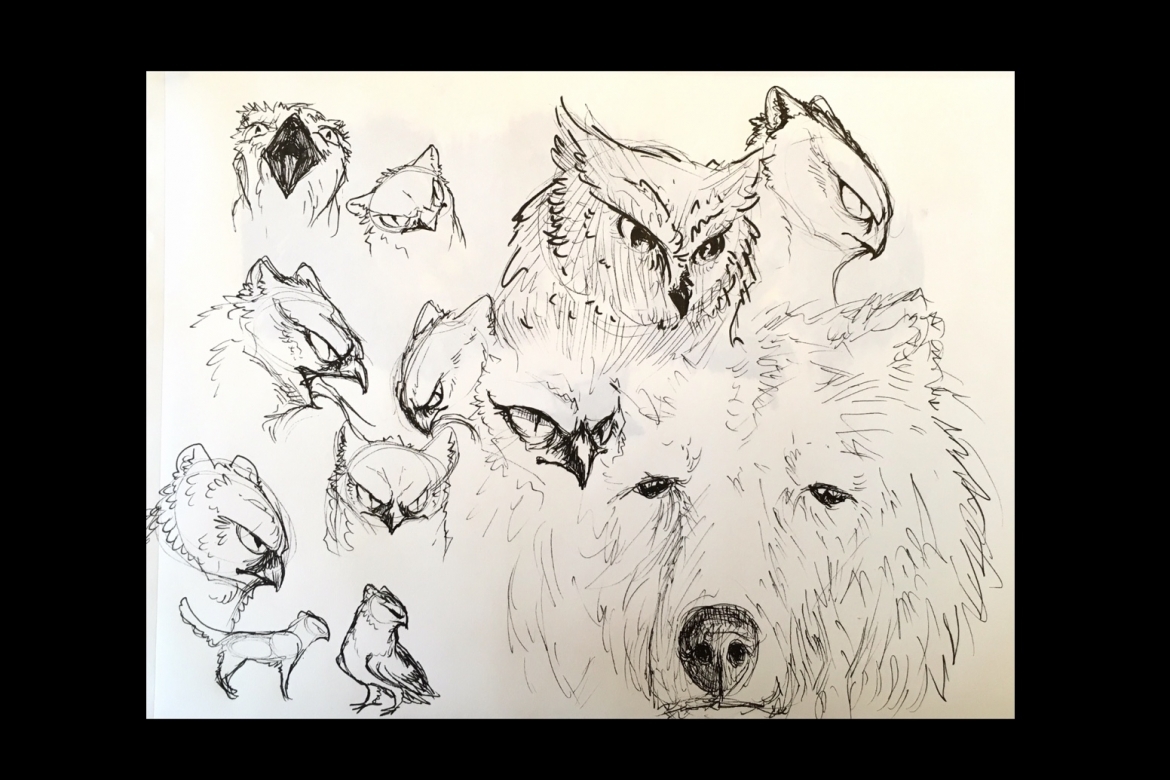 Imagine yourself as an animal living in the wild, apart from humans, and write about your experience of everyday survival from this perspective. What are the biggest threats to your existence? What are the advantages and joys of seeing the world in this new way? If you’re stuck, try writing through a pet’s eyes. [Challenge created by Catbatgirl; Art: "Breakfast Doodles" by cedar, YWP]

Here come the annoying humans. Has it really been a whole day already? I think they are lying. I am trying to enjoy the sun and fresh air. Why do they have to come along and ruin everything? Is it because I pooped the whole length of the barn on the way out this morning? If that is the reason then I am sorry. I said I was sorry, now can you leave me alone? Fine. Since you can’t respect my wishes, we will do this the hard way. I think that instead of going inside, I am going to sit here and enjoy the sun. The sun is so nice. Oh great, one is coming towards me. Maybe if I stay very still they won’t see me. Okay, okay stop poking me, I will get up. Hey, just because I got up doesn’t mean I am going to start walking. Fine, if you insist on me going I guess I will. You thought I was going to head towards the barn? You were wrong. Tag you're it, catch me if you can. I think I should go see what is over there. I know I had all day, but I didn’t go over here yet.
Read More
poem challenge: Critter

We run deep in the grass far from the sight of the danger,

We are small but in our world we are big.

In the winter it's the walls of the house.

At night we run freely,

In the day we run in fright.

The pink tails remind me of worms that are in the ground.

We are everywhere but not always in sight.

We have small squeaks but make people screech.

I am a dragonfly
Swirling across the pond.
I hope that I would not be shy,
And would make a bond.
I look at my reflection,
In the deep clear pond.
I hope that I'm going in the right direction.
I find a wand.
I grant a wish
And give the wand a swish.
My wish comes true,
And I meet my future friend named Sue.
Read More
fiction challenge: Critter

As I soar through the air I find my prey, an old mouse crawling across the forest floor. As I dive down I screech revealing my position the old mouse hides in a stump Mouse one me zero. As I go another day without food to bring back to my nest I must resort to worms and insects like a fool. I am an eagle, a fierce predator not some bottom of the food chain crow. The eagle so full of himself brings back insufficient food. How can you be full of yourself but still hungry for others.
Read More
fiction challenge: Critter

I ran and didnt stop for awhile. I was scared. I looked around but my pack was nowhere around me. I was just a little pup alone in the wild. My mum said to watch out for people with long sticks that go up to the peoples faces and go bang.
I whimpered as I heard another human near me. Then I smelled three more close behind. I knew that if i stayed hidden they would find me but if I ran they would come after me.
I looked up and saw a crow watching me hovering in the sky. Papa always said to follow the crows if you are lost.
I took of running and followed the bird away as the humans chased us.
Then I saw a little opening and the mountain and dived in. The people ran by me.
I had to find my pack, I was just a lone wolf without them.
Read More
fiction challenge: Critter

My name is Kingston. I am a Mouse. I like going in the woods and at night I go into a home and get all cosey I do not know why people when they see me they want to kill me because I look so adorable. My biggest arch-nemesis is the owl at night. He comes out and feeds off all the mice that can't find a home to stay in for the night. He does not come out during the day tho so that's when I look for food or Explorer but that is my life.
Read More
fiction challenge: Critter

I am up in the trees and I hear a noise.

I'm confused because I know
my neighbors aren't home.

I quickly run down and I go by the stream,
careful not to get wet because it's hard for my fur to dry. I quickly grab a  drink.
I am very cautious because

There have been fox sightings.
I go to a bush because there are lots of bugs.

I take a quick bite then I feel something approach me
just from behind me.

I look behind me, it's just my rabbit friend coming to get some berries.
- Lyla DeTeso
Read More
fiction challenge: Critter

Running in the woods

Running in the woods

Alone with fear
Stuck in shape that lies uncapable

Of keeping your  insides safe

Scared but of fear

Build up of running until your free

Of your very own self …

Foam at the mouth of your predator

Your heart races of fear

Though you love the fear

The utter excitement of running

The wind in your fur

Humming to you as you run

The good kind of freedom

The kind that makes you dizzy with anticipation

Of doing whatever you please

You glide from tree to tree

The  softness of safety

The love of being cozy
Read More
fiction challenge: Critter

“Hey Dave,” said Larry. “Come here!,”Larry yelled! It was a giant northern pike!  “You know we are just perch, that pike will kill us with one big chomp!,” I said, very concerned. It was swimming around in the deeper part of the weed bed. “What's going on!?,” Bucky shouted. “We found a northern pike,” Larry said excitedly! “Why are you so excited about a pike, remember we are the prey,” Bucky said concerned. Larry was pretty young so he wouldn't know better, I thought it was ok for Larry to be interested in pike. “Come on guys! Let's go get some breakfast,” said Bucky happily.

We swam to the really shallow part of the weed bed looking for mysida shrimp and crayfish. Larry spotted a big crayfish. “There's breakfast,” Larry shouted. We all attacked the huge crayfish. We were all so hungry so we gobbled it down in a flash. We were all heading back home when we realized that the pike was gone!
Read More
fiction challenge: Critter

I am a falcon

I am a falcon, I am returning to the ledge that I call home just as I  have done  every night for almost six weeks now. Soon it will be time to leave, the eyass will  be grown and fly away. As I near the nest I hear the eyass chirping, asking for the rabbit that I carry in my talons. I drop it near them and the fresh meat is pounced on eagerly. I watch as they fight over the food then after waiting a second more, break them apart and split it between them. This is how every day of the last 6 weeks has ended. As I settle down in a tree nearby I hear them chirping.
Read More