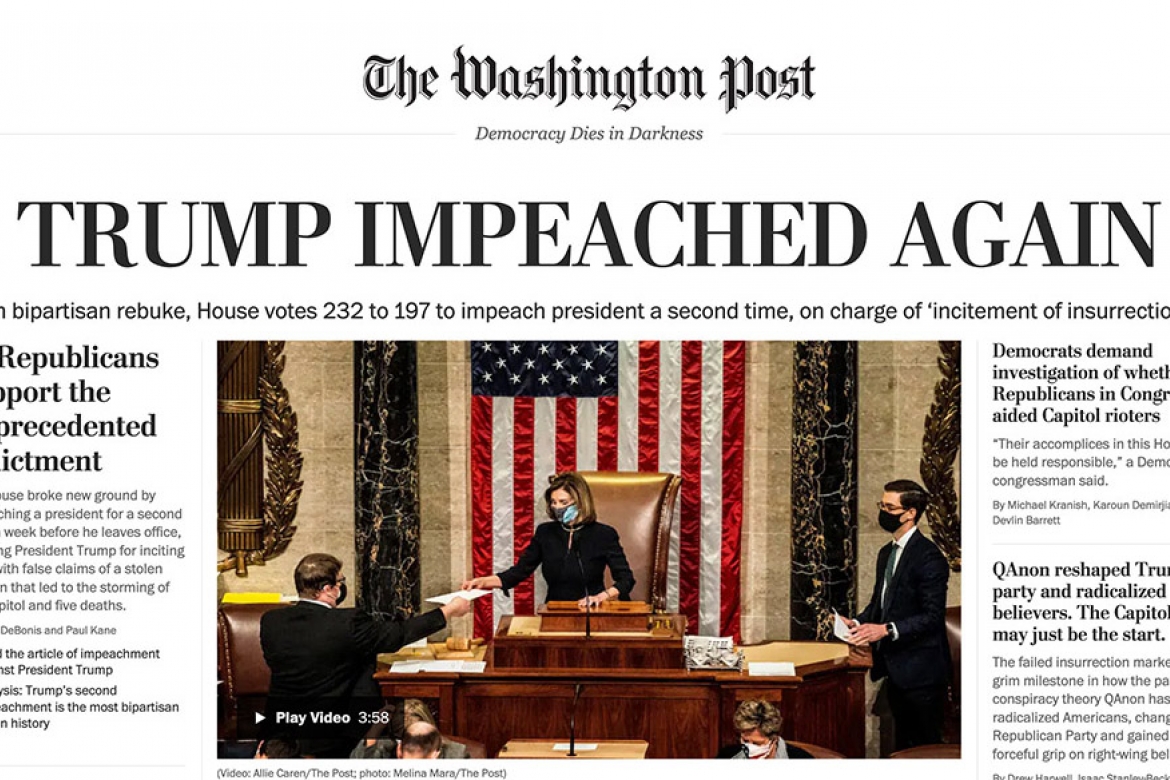 [Washington Post, front page, Jan. 13, 2021]
A week after the Capitol was stormed by an angry mob of Trump supporters, the House voted Jan. 13 to impeach the president for inciting an insurrection. Next move: A trial in the Senate. What do you think about this moment in our history?

Ha ha ha ha ha ha ha ha
How did you not see this coming, sir?
You've been sitting behind your desk like charlie brown's teacher, wah wah wah, while we're here saying, really?
I can imagine the phone calls now:
"Sir, there's nothing we can do. You're impeached."
"No, it's fake. There's no way they can put me in a peach."
"No, sir, you've been impeached, not put inside a  - "
And so on.
You've become the first president to be impeached twice!
Maybe they will make a new term, inoranged or something? Imoranged, maybe.
My only question is, why did it take us this long?
Read More
poem challenge: Impeached-Part 2

One week &
one day ago, I watched the
Capitol collapse on
CBS Live.

The day began normally:
Zoom classes that make
my eyes sore & send
sparks of white
dancing across my
line of vision. Then
Art came, my
twice-a-week escape
from reality. Suddenly, someone
went off mute & said:
They entered the Capitol.
Four words & I change,
along with the
rest of the world. I
didn't know what had happened, or
what the heck was
going on. So I
turned on a live newsfeed
& just couldn't.
Couldn't think.
Couldn't feel.
Couldn't breathe.
I could only watch.

P.E. was cancelled that day
(Thank you, God),
giving me more time
to watch the news in
the privacy of my room
for more than
two hours. I called a
friend of mine that
I had known since
Kindergarten; I
Read More