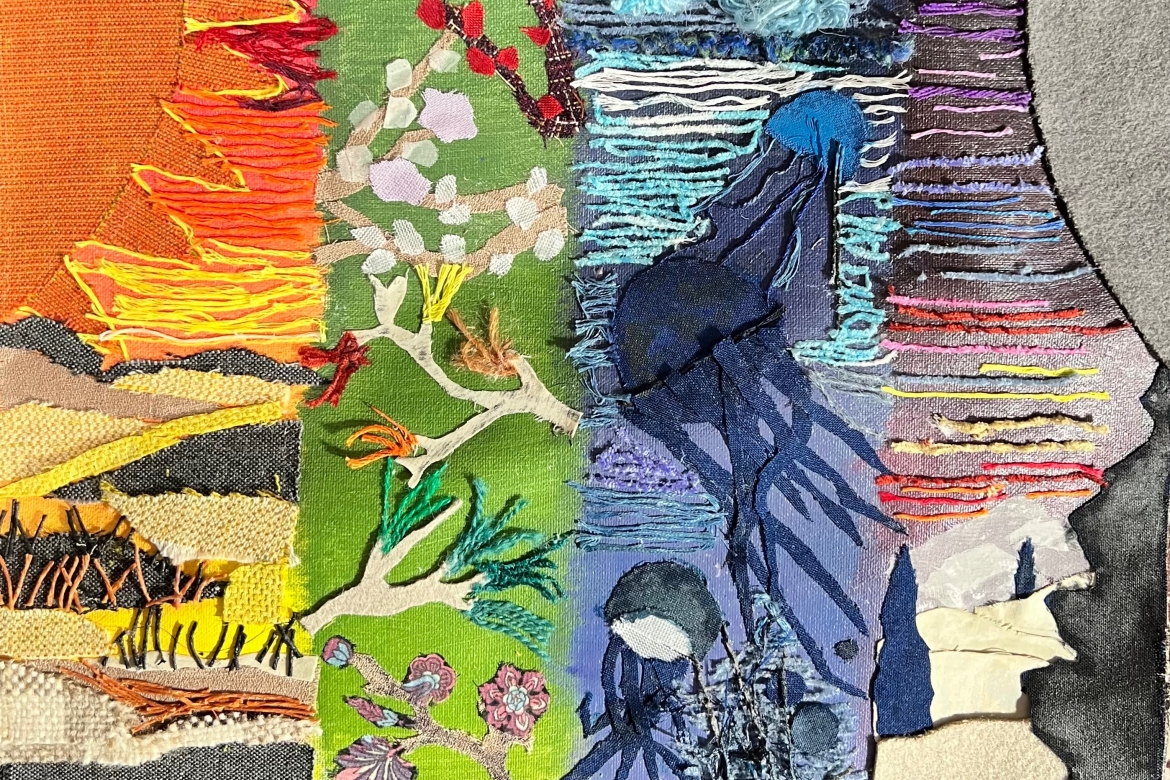 I was inspired by nature. People spend too much time indoors due to the pandemic. I think that everybody should go outside for a walk in the park to relieve their stress. I’ve spoken to my friends and their family and from the last two or so years onwards, there’s been a lot of disconnection with nature. Everyday, we go to school or work in one spot in one location in one city, never really going out to explore the vastness of nature. My artwork offers a safe way for viewers (myself included) to gain their own unique insight into various scenes from nature without having to walk outside due to pandemic concerns.

I chose an interesting format where I divided my loose canvas into four parts and each part corresponded with a major nature theme: the first part was sunset with valleys and wild grasses, the second part was various tree branches with leaves, the third part was an ocean with jellyfish bobbing and algae and ocean rocks, and the fourth part was a wintery scene underneath a half moon along with evergreen trees. I decided to glue all the parts of my project, because I didn't have skill with weaving, quilting, knitting, crocheting, stitching, etc… although I did crochet the mini clouds in the third ocean panel of my project so that they would look puffy and soft (a flat piece of fabric cut and glued would not have that same texture). My construction technique was cutting, pasting, and gluing. Also, my choice of gluing all the parts together meant that I could cut and manipulate fabric so that they would resemble jellyfish, stones, branches, etc… In this way, I could easily remind my viewers that what they are looking at is imagery directly related to nature. My cutting technique relates to what I wanted to portray. For example, if I cut a mountain, I would cut the fabric down to create a sort of a mountainous slope or if I wanted to cut a branch, I would cut in a zig-zag sort of shape to create the irregular angles and curves of a branch.

Furthermore, color is the most important part of my project because of a strict orientation of the color palette. All four parts are layered with acrylic paint (to create a soft background) to represent what I believe are the four colors of nature: warm colors, green, blue, and wintery colors. The first part consists of a warm color palette to represent summer. There are fabrics of light yellow valleys and black (shade, shadow from sunlight) and orange and yellow colored grasses. I don’t know what the type of fabric is called, but I used a tough, almost thin rope or string like fiber to create and cut the grasses, because it represents that tough texture of field grasses or crops. In contrast, softer strands of yarn dot the summer-afternoon sky to create a soft sky consistent with the acrylic underpainting layer. The second part consists of a spring/fall color palette. The underpainting is green and this represents trees. I chose many types of other colors besides green to show the different leaf colors: red, yellow, and orange. I also used softer yarn for the leaves to juxtapose it with the rougher texture of the branches (I don’t know what material the fabric for my trees is) but it looks rougher than the leaves, which is also true in real life. For the third column, there is a spectrum of cool colors to represent water and oceans and marine life. For the jellyfish, I could only find one type of dark blue for it (which is why I might decide to paint them later on in different hues of blue). Also, for the seaweed, I chose this fiber that had loose strands coming out, which was intentional so it looked like actual seaweed. There were many variations of blue yarn that made up the ocean. I avoided a rougher textural fiber, instead choosing yarn, because water is obviously not rough--it flows. Lastly, for the final panel of my project, there was a color palette consistent with wintery scenes--gray moon, snow-white mountains, dark blue evergreen and pine trees, and a large dark-purplish sky. This time various colors consistent with a beautiful setting in the night sky are present in the form of soft yarn in the sky-- mauve, light blue, black at the top, purple, red, orange, etc… It was my intention to choose a very soft material consistent with snow-white mountains as well.

About the Author: Eric