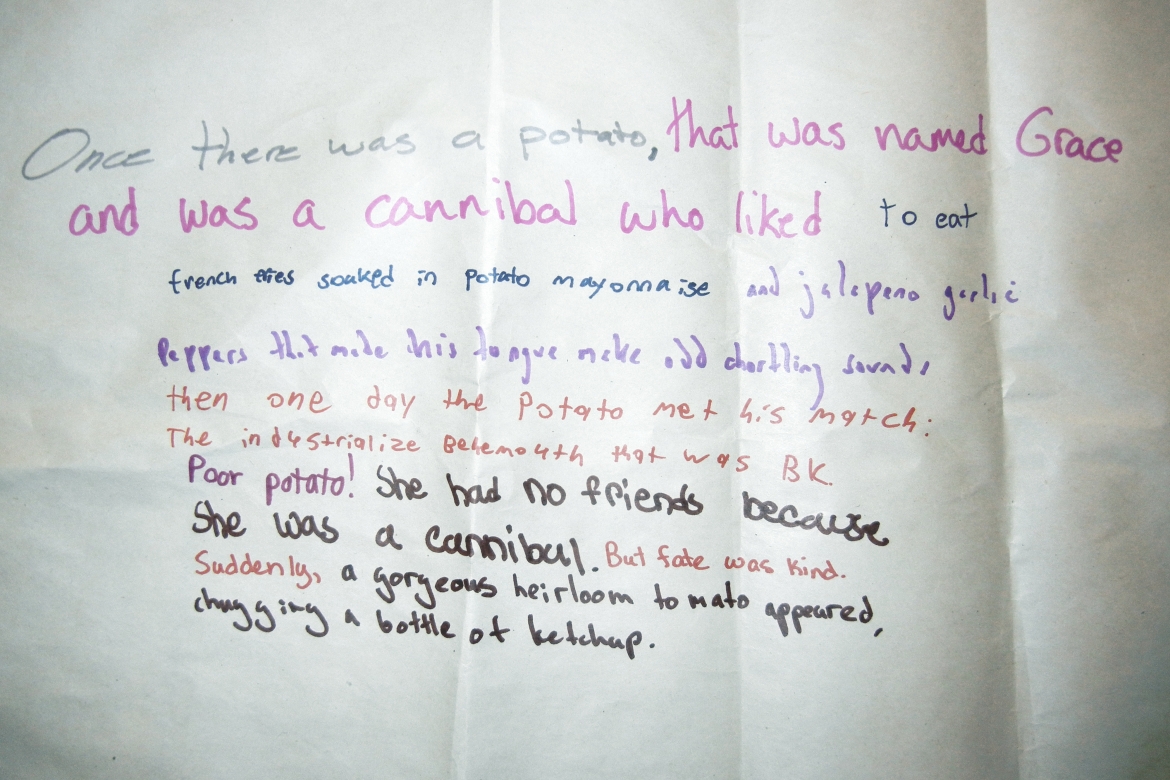 These are all of the Exquisite Corpse Stories written collectively by the writers who attended YWP's Celebration of Writing (COW) on November 11th, 2017 at Vermont College of Fine Arts in Burlington.

I highly encourage you to use these stories as prompts and finish them or write building off of them.

Because so much is lost in the translation of handwriting to typed text, I have included photographs of several of the stories and created what I call an interactive story explorer contraption. I encourage you to visit it and explore these stories as they are arranged on the paper.
For the Interactive Story Explorer Contraption, click above or visit this link: https://docs.google.com/presentation/d/1KE5gS3XeHRw1ZWTx_h2UpG9Bg0iWYDm0hCcB9Pbv_hA/edit?usp=sharing

Once there was a Guinea pig who liked eating happy meals but only for the toy. They were his only friends, they stayed with him in his cage made of sweet buttermilk and pink taffy. 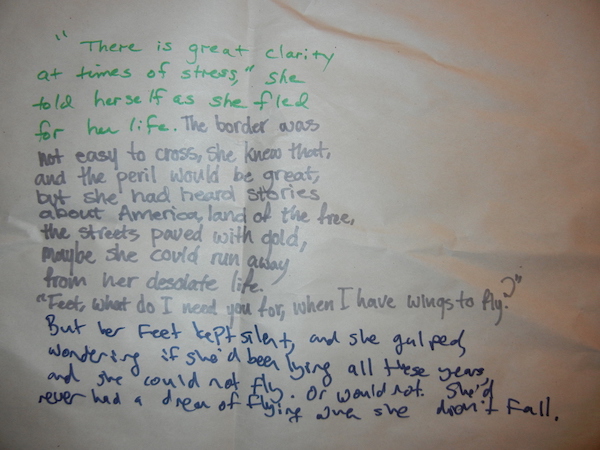 “There is great clarity at times of stress,” she told herself as she fled for her life. The border was not easy to cross, she knew that, and the peril would be great, but she had heard stories about America, land of the free, the streets paved with gold, maybe she could run away from her desolate life.
“Feet what do I need you for, when I have wings to fly?”
But her feet kept silent, and she gulped, wondering if she’d been lying all these years and she could not fly. Or would not. She’d never had a dream of flying when she didn’t fall.


Wonder about things.
Question everything.
Who is he, is he who he says he is?
Why would be lie about being so helpless?


Did you ever wonder what comes after this life.
Maybe?


Once there was a potato, that was named Grace and was a cannibal who liked to eat French fries soaked in potato mayonnaise and jalapeno garlic peppers that made his tongue make odd chortling sounds. Then one day the potato met his match: The industrialized behemoth that was BK. Poor potato! She had no friends because she was a cannibal. But fate was kind. Suddenly, a gorgeous heirloom tomato appeared, chugging a bottle of ketchup.


Once upon a time, Harry Potter met Katniss Everdeen and they decided to eat Draco Malfoy so they set a trap to catch him. It failed horribly so they tried again. They wanted the trap to be in the exact right place, the top of a volcano in Iceland. So, they used magic spells to create a deformed Pansy Parkinson doll. Yikes. So when, one day Draco Malfoy just happened to be walking along the top of a volcano in Iceland, he saw a Pansy Parkinson doll. It intrigued him, as disturbing things tended tom so he walked toward it and poked it, Suddenly, it came to life with a shout and gave him a big…


It was a dark and stormy night. I was eating potatoes that were cut up into squares and watching my brother Johnny. He always knew how to push my buttons. And somehow, I always got in trouble for it.


Life at this point had gone downhill because I failed my math test.


A long time ago on the plan[e]t Zora, Acorn Woman was at battle with a scrappy squirrel. It was [such] an intense battle that they didn’t know why they were fighting. They only knew the victor would rule every acorn in the galaxy, an impressive accomplishment. Acorn Woman was flinging acorns at Scrappy Squirrel, and Scrappy Squirrel was imitating Professor Quirrel, hoping that his turban would scare Acorn Woman off.


In a deep dark forest, Tyler pads along the dirt covered path framed by trees and mushrooms. He only feels at home when he walks among the pines. It’s strange cuz when he’s silent they seem to read his mind. Something feels wrong, today, however. The forest is too silent. The trees are waiting for something. And there is a malicious feeling in the air.


This is a story of a boy. A boy who loved another boy. This boy who had two moms still thought his love to be wrong.


Once upon a time, Laura ran towards a potato. She likes potatoes and thought this one looked friendly, or at least tasty. The potato ran to her and hugged her. But this was an evil potato and before she knew it, he had stabbed her in the back. Quite literally. But luckily, Laura was made of hot dogs and was not affected. Laura and the potato encountered a problem, a quite serious one. Sam Clapduddle the third found Laura and the potato lying on the sidewalk, and as Sam had always been jealous of his cousin Tim Ketchup, he had an idea.


What is a game to one is what family is to another. 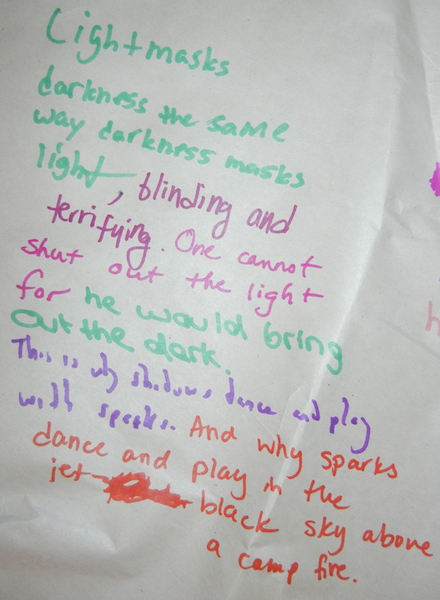 Light masks darkness the same way darkness masks light, blinding and terrifying. One cannot shut out the light for he would bring out the dark. This is why shadows dance and play with sparks [specks?]. And why sparks dance and play in the jet-black sky above a camp fire.


The leaves danced in the wind, fragile as they were, and Emily felt at peace with the world. Emily knew that her dad had left,


Her eyes welled up with tears…
Her face blushed red….
She stood, the crumpled note held tightly in her sweaty palm. She stomped to the kitchen and threw the note in the trash, only to dig it out a few minutes later. She uncrumpled it for the third time that day, not that she was counting. She read it again, letting the words soak into soul. It just wasn’t fair.


His ears rung from the explosion. The floor shook, and the walls rattled, crumbling to dust as a wave of fire swept through the room. Filling my lungs with smoky ash. I watched the ash settle, slowly choking the room and its contents, me along with it. Another day of loss – too typical. When will my life exist without this kind of debilitating tragedy.


The woman stood hands buried in her pockets, her coat drawn tight against the bitter cold. The heavy wooden door swung shut with a “bang!” behind her. “Hello.” A quiet voice rang out from the top of the stairs. The woman froze. She knew that voice well. 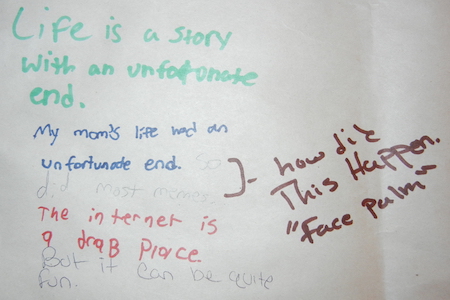 
The wind brushed against my skin and blew my hat across the narrow, empty, street. It was then that I noticed the opening, massive door. A dark shape stood in the doorway and the hairs on the back of my neck prickled. I knew I should probably get out of here, but my curiosity got the best of me. I stepped in, unaware that my life would forever be changed.


Some days I wished I was just a spectator in this life. Watching people as they dally with their everyday life. Not having to worry about my own responsibilities. Just switching from person to person observing them. What with all their wonderfully silly tasks like feeding the fish (grandmother’s whim, go along with it, it makes her happy) or even the normal, everyday tasks.


She was a woman in which everyone depended on, never having a moment for herself. Throughout time this saddened her more and more, for all she wished was for… was to take a nap.


The moment I died, I hadn’t got my hat on. Now that might seem a funny thing to worry about, what with me being dead and all, but believe you me, I cared. The hat was the last thing I had left.

About the Author: jbird18