One in a Million Pony 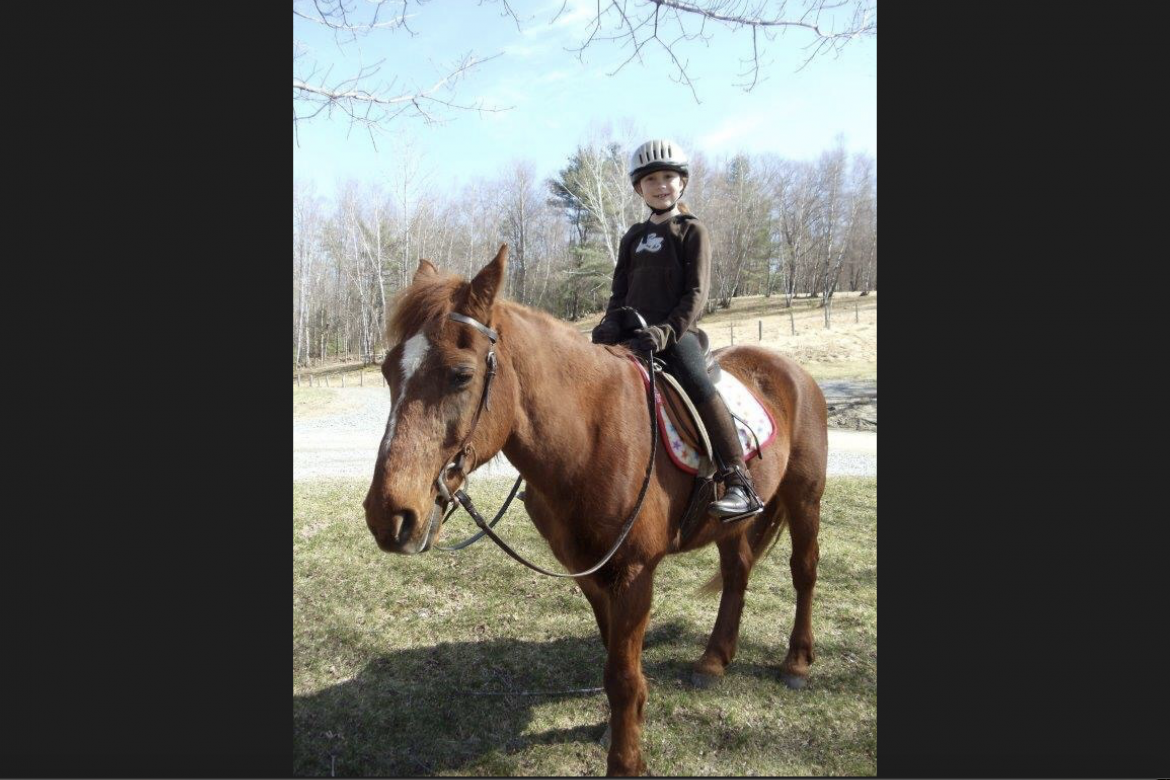 I remember the first time I heard your name. I remember how ridiculous it sounded to me, and how distraught I was that Maren picked you over the pretty paint horse I had seen. Taco, what a ridiculous name. A horse should be named something beautiful and regal, not after some food. This was the extent to which my five-year-old self considered your arrival into my life.

God, how wrong I was. How could I have known that that four letter word would come to mean so much to me? How could I have known all the joy, all the love, all the laughs, all the hugs, the hope, the security, the strength, inspiration, and passion that it would bring to me? When I first heard your name I wanted nothing to do with it. Now, your name engraved in the brass of my bracelet is the most beautiful thing I’ve ever seen; all I want to do is walk outside and call your name and see your ears perk up and your head bob in that way it always did and hear your sweet, sweet nicker call back to me. That’s all I want.

I remember when Maren was riding you in the snow and I came out to watch. I remember standing there watching you gallop through the knee-high snow. I started running towards you. I was wearing some weird cow-print coat and it scared the crap out of you. You fell over and Maren went with you. My little heart skipped about four beats. But you stood back up and Maren did too.

I remember riding you for the first time. I did absolutely nothing. I put all of my riding clothes on and Maren helped me scramble onto your back. I sat there holding the reigns with the biggest smile on my face. Maren walked in front of us and you followed her down the path into the woods without a second thought. I was in love.

I remember my first show. I was so nervous. Maren told me that all I had to do was salute the judge and aim you at the fences, that was it. I messed up both of those tasks. I marched into that ring and I took a deep breath and stuck up my chin and I saluted that judge. I saluted her. The normal way to salute a judge for a jump course is to glance over and nod, but no, no that wasn’t quite weird enough for me. I stared her in the eyes and I put my hand to my forehead and I saluted that judge like I was in the army. Then I proceeded to my jump course, which we did perfectly. So we continued on to the jump-off round, where disaster awaited. I pointed you at the wrong jump. I had one job, and I pointed you at the wrong jump. Yet at the last second, you dropped your shoulder and ran right past that jump to the correct one. You memorized the course from watching other competitors go. That was a humbling moment for me; I realized that my horse was smarter than me.

I remember after Sammy died. Caelan was heartbroken. She didn’t want to ride any horse other than him. Eventually, Maren and I got her to go on a trail ride with us. Maren had outgrown you long ago and I was riding Teddy now. It was Caelan’s turn to fall in love with you. It didn’t happen as quickly as it had for me and Maren, though. You kept reaching down and snatching grass the same way you’de been doing it forever. By the end of the trail ride, Caelan was crying and screaming about how she never wanted to ride you again. She stormed out of the barn, leaving you on the crossties. Maren and I were furious. We went and got Caelan and we told her that she was to never blame you for a bad ride; that no matter how upset she was she had a responsibility to take care of you; that she was to untack you, give you a treat, and tell you how thankful she was before putting you in your stall.

I was so tired and Maren came into my room and woke me up; I had to resist the urge to punch her (I’m not a morning person). I was about to start complaining but she shut me up immediately. “Hannah, something’s wrong with Taco and I need you to come help me in the barn so I can keep an eye on him.” I was out of bed immediately.

You looked fine. I thought you were gonna be ok. You had never not been ok. Maren and I took turns walking you in case it was colic. It was Saturday and none of the vets in the area were on call. I was so mad. I knew logically that it wasn’t their fault that this was happening, but in my heart, I was so, so angry. How could they, I thought, this is Taco. They should all be coming to save him. But they didn’t come.

You started getting worse and my heart started to sink. I still was so sure that you would get better though. Then Maren called Anne; Anne who showed up at our house every morning before any of us were even awake to cold hose your leg when you were injured. Anne came. Anne has never been quite human in my eyes, and despite being 14 and having outgrown fairy tale magic I was still certain that Anne coming would fix everything.

She told us that we needed to start preparing ourselves. She told us that this might be the end. With those words my entire life, my world, my galaxy, my universe, my everything shattered and rained down upon me. Maren called the vet one last time.

I remember everyone coming out to see you. My mom was crying, I was crying. Gregor stared at you silently. Maren was talking to you in a whisper while blinking back tears. My dad paced back and forth. Caelan arrived home from her friend's house just before it happened. Everyone said their goodbyes and hugged you one last time. My mom and Caelan went inside, as they didn’t want to watch. They asked me and Gregor if we wanted to come inside too, but I wanted to be there. I didn’t want to leave you until the very end.

I stood there next to Gregor as the vet came in with that cursed needle. Maren was holding your face and crying. I have never met someone stronger than Maren. Her tears came silently so that they didn’t stress you out.

Then it happened. I closed my eyes and hugged Gregor and sobbed violently. I screamed and cried and held Gregor so tight. I looked up at one point and saw tears streaming silently down his face. Gregor doesn’t cry a lot.

Then I heard it. I heard you cough and sputter and I heard a thud as your body fell to the ground and your soul rose to the heavens. I wish I had gone inside.

Now Maren cried. She called out to you over and over again but this time you didn’t nicker in the answer. She sat on the ground with your head in her lap and called out for her baby to come back. I hugged Gregor.