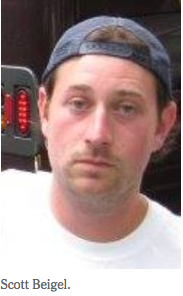 As gunshots echoed through the high school, a geography teacher, Scott Beigel, 35, paused to usher stragglers into his classroom before locking the door, only to be shot and killed himself as the shooter strode by.

A parent, Jennifer Zeif, credited Mr. Beigel for saving her son’s life. Her son, Matthew, 14, had been the last one to slip inside the class, just ahead of Mr. Beigel. Seconds later, the room filled with a smoky haze, Matthew said, and he turned to see his teacher lying near the door, pale and bleeding.Photo
Scott Beigel.“Mr. Beigel could have passed Matthew up and gone in the classroom first,” Ms. Zeif said. “In that case, Matthew would have been the one in the doorway.”

On Thursday, as officials identified 17 people killed in the shooting at Marjory Stoneman Douglas High School in Parkland, Fla., some of the victims, like Mr. Beigel, were remembered for having tried to spare others in the moments of chaos that unfolded inside the school.

Aaron Feis, a popular football coach who was killed, also had tried to protect students, officials said. “He was that kind of guy,” said Jack Fris, a former football player at the school.

Friends said they were not surprised that Mr. Beigel, a much-beloved figure at a Pennsylvania summer camp that he attended and later helped to run, had put his students’ safety above his own.

“Thousands of people at Camp Starlight looked up to Scott,” said Grant Williams, 33, an emergency room nurse who worked with Mr. Beigel at the camp for several summers and was mourning long-distance with former camp counselors and campers on Thursday. “He was someone you strive to be like,” said another former Starlight counselor.

At the Florida high school, teachers and students were among the dead. There was a soccer player, a student nicknamed Guac and a trombonist in the marching band. Eight of the victims were girls and young women; nine were boys and men. They ranged from 14 years old to 49.

These are some of their stories. 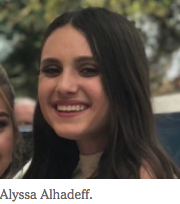 Alyssa Alhadeff, 14, had played competitive soccer since she was 3 years old. Like any athlete, she had her ups and downs. But when her club, Parkland, faced off against the rival team from Coral Springs on Feb. 13, she was at the top of her game.

“Her passing was on, her shooting was on, her decision-making was on,” her mother, Lori Alhadeff, recalled. With her outgoing personality, Alyssa had a wide circle of friends at Marjory Stoneman Douglas High School. She placed first in a debate tournament, was taking Algebra 2 and Spanish 3, and was honing her skills as an attacking midfielder. The score at what was to be her last time on the soccer field was 1-0, Parkland.

“I was so proud of her,” her mother said. “I told her it was the best game of her life.” 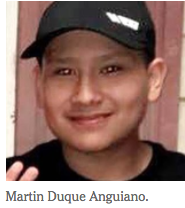 “He was sweet and caring and loved by all his family,” Miguel wrote. “Most of all he was my baby brother.” 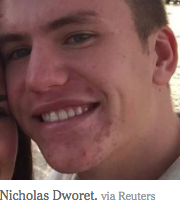 Nicholas Dworet, a promising high school swimmer, took a recruiting visit to the University of Indianapolis a few weeks ago. After a group dinner, he pulled the coach aside and said he wanted to compete there after he graduated this spring.

“He was an instant part of our family,” said Jason Hite, the university’s swim coach. Mr. Hite said Nicholas, 17, had received an academic scholarship and planned to study physical therapy.

University officials and a youth swim team in Florida said Nicholas was among those killed on Wednesday. A post on the Facebook page for TS Aquatics, the Florida club where he swam, described Nicholas as an amazing person who had been “on a major upswing in his life.”

Nicholas had improved academically and athletically since starting high school, Mr. Hite said, and his mentors in Florida “felt like the best was still to come for him.”

“We were going to continue to groom him to be a future leader for our team,” Mr. Hite said.

Mr. Hite said he sent Nicholas a text message on Wednesday afternoon after hearing about the shooting at his school. He got no response.

“The saddest thing to me is how much life this kid had and how hard he had worked to change directions and change paths,” Mr. Hite said. “He was really going in the right direction and he had really created some opportunities for himself.”Photo 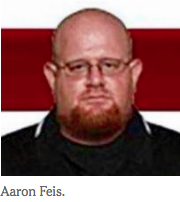 At Stoneman Douglas, Mr. Feis was known to all — an assistant football coach and a security monitor. But he too had graduated from the school, played on the football team, and knew exactly what it was like to be a student in these halls.

So he was seen as someone who looked out for students who got in trouble, those who were struggling, those without fathers at home. “They said he was like another father,” Mr. Feis’s grandfather, Raymond, recalled. “He’d go out of his way to help anybody.”

School officials said that Mr. Feis, 37, did the same on Wednesday. When there were signs of trouble, they said, he responded immediately to help. “When Aaron Feis died, when he was killed — tragically, inhumanely — he did it protecting others; you can guarantee that,” said Scott Israel, the sheriff of Broward County.

“I don’t know when Aaron’s funeral is,” Sheriff Israel said. “I don’t know how many adults are going to go, but you’ll get 2,000 kids there.”

In Parkland, Austin Lazar, a student, recalled his former coach as cheery and selfless. “He always put everybody before himself.”

Mr. Feis was married, his family said, and had a daughter, Arielle. 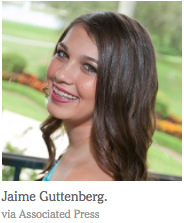 Jaime Guttenberg, 14, danced nonstop. Sometimes she went on for hours, her aunt, Ellyn Guttenberg, said. Jaime was warm, too, always taking Ms. Guttenberg’s son, who has special needs, under her wing.


Jaime’s Facebook page, now memorialized, shows photos of her dancing, hanging out with friends, enjoying the beach and snuggling a dog.

Her father, Fred Guttenberg, posted this on Facebook: “I am broken as I write this trying to figure out how my family gets through this.” 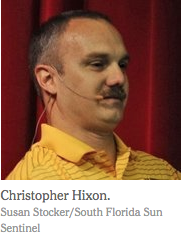 Christopher Hixon, 49, the school’s athletic director, was a well-known figure in Florida high school sports. One man, Jose Roman, posted on social media that Mr. Hixon was “a great coach and an awesome motivator” when he was a freshman athlete years ago.

Mr. Hixon was named athletic director of the year in 2017 by the Broward County Athletics Association. 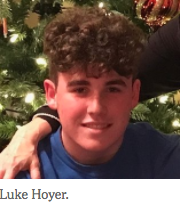 Luke Hoyer, 15, spent last Christmas with his extended family in South Carolina, where he bowled, joined in a big holiday meal and swapped stories with relatives.

A cousin, Grant Cox, who was at the Christmas gathering said the family had been told by the police that Luke, a freshman at Stoneman Douglas, was among those killed on Wednesday.

Mr. Cox said Luke was a basketball player who was ambitious about the sport and admired N.B.A. stars like LeBron James and Stephen Curry.

“He was quiet, but a very happy individual,” he said. 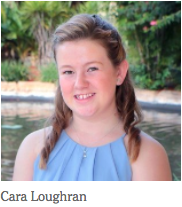 Cara Loughran, 14, loved the beach. She adored her cousins. And she was an excellent student, her family said.

“We are absolutely gutted,” by her death, her aunt, Lindsay Fontana, wrote in a Facebook post. “While your thoughts are appreciated, I beg you to DO SOMETHING. This should not have happened to our niece Cara and it cannot happen to other people’s families.” 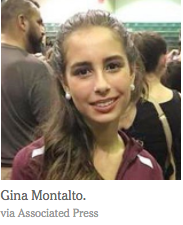 Gina Montalto, 14, was identified in local news accounts as a member of her school’s winter color guard team.

Andy Mroczek, who has worked as a choreographer at Stoneman Douglas, posted a tribute to Gina on Facebook. “We lost a beautiful soul tonight,” he wrote. 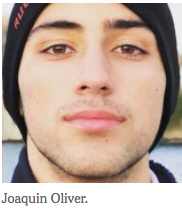 He played basketball in the city recreational league — his jersey number was 2 — and he loved to write, filling a notebook with poetry, said Julien Decoste, a close friend of Joaquin’s and a fellow senior at Stoneman Douglas.

“Guac and I always wanted to graduate together and prove everyone wrong, that we would be successful together,” Julien said.

On Tuesday, Joaquin, 17, asked Julien to help out at his next basketball game, which was scheduled for Thursday.

On Wednesday, as he hid inside a closet during the shooting, Julien texted Joaquin to check in.

“You good?” Julien texted. “Bro I need you to answer me please.” 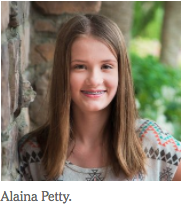 Alaina Petty, 14, had helped do cleanup work in Florida after Hurricane Irma, her family said in a statement, and she was an active member of a volunteer group with the Church of Jesus Christ of Latter-day Saints.

“Her selfless service brought peace and joy to those that had lost everything during the storm,” the family’s statement said. “While we will not have the opportunity to watch her grow up and become the amazing woman we know she would become, we are keeping an eternal perspective.”

Alaina was also a member of the Junior Reserve Officer Training Corps, her family said. 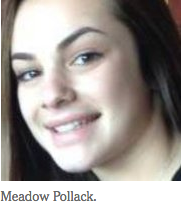 Meadow Pollack, 18, was a senior at the high school who was planning to go to Lynn University in Boca Raton, Fla., next year, according to her father, Andrew Pollack, who said his daughter was among the dead.

“She was just unbelievable,” Mr. Pollack said. “She was a very strong-willed young girl who had everything going for her.”

Mr. Pollack described his daughter as smart, beautiful and caring. She worked at her boyfriend’s family’s motorcycle repair business. 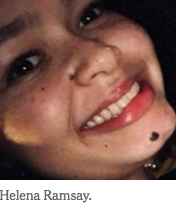 “Though she was somewhat reserved, she had a relentless motivation towards her academic studies, and her soft warm demeanor brought the best out in all who knew her,” he said, later adding: “She would have started college next year.” 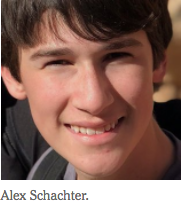 Alex Schachter, 14, played the trombone in the Stoneman Douglas marching band, and was proud to have participated in winning a state championship last year. A freshman at the high school, he often played basketball with friends and was “a sweetheart of a kid,” his father, Max Schachter, said. Earlier this week, the two had discussed which classes Alex would take next semester.

Mr. Schachter said Alex had loved his mother, who died when he was five years old. His older brother also attends Stoneman Douglas and survived the shooting. Alex “just wanted to do well and make his parents happy,” his father said. 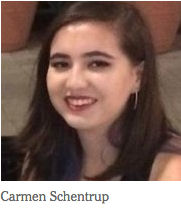 Carmen Schentrup, a 2018 National Merit Scholarship semifinalist, was the smartest 16-year-old that her cousin, Matt Brandow, had ever met, he said in a Facebook post. 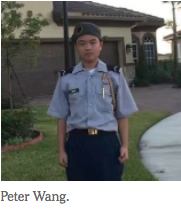 Peter Wang, 15, a freshman, helped his cousin, Aaron Chen, adjust when he settled in Florida.

“He was always so nice and so generous,” Aaron, 16, said, adding that even though Peter was younger he had worked to be sure Aaron didn’t get bullied when he first arrived.

Peter was last seen in his gray uniform for the Junior Reserve Officer Training Corps, or J.R.O.T.C., on Wednesday. On Thursday, Aaron and another cousin said the authorities had informed the family that Peter was among those killed in the shooting.

“He was the kid in school who would be friends with anyone,” said the other cousin, Lin Chen, 24. “He didn’t care about popularity.”